Oh dear, I think I need to buy a caravan!

We've just spent a fabulous couple of days at a dear friend's family caravan. To say that the kids enjoyed it would be an absolute understatement.

From the moment I told Sophie that we were going she was counting down the days.

'That's not long' she would reply every time I told her how long it was until we set off on our mini holiday. For some reason the weather was in our favour - the road closing snow had cleared over night and there wasn't a cloud in the sky as we arrived at the pretty tea rooms and farm for ice creams.

We even managed to visit the new spring lambs and expectant mothers. I felt nothing but pity for the poor ewes trying to stay on their feet as the lambs kicked and jerked inside their swollen tummies - I remember that feeling! 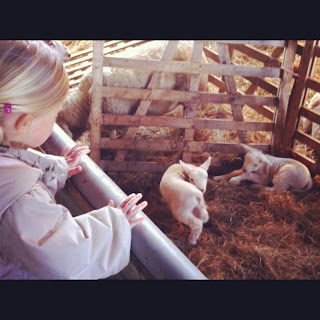 We stayed on a site just oust side of Keswick in the Lake District - it was beautiful. So quiet and nestled upon a tranquil river flooded with wildlife. The perfect setting for 3 toddlers, 1 baby and 2 Mummies hoping for a couple of stress free days.

We made it to Keswick for the day - did the usual things; visited the lake, ran away from the geese, had lunch in a tea room, listened to the busker in the subway but we were pleased to return to our little quiet spot, ready for an evening of movies, popcorn and wine (for the mummies) 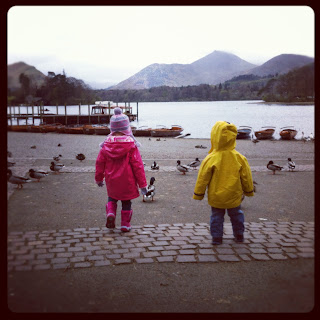 Now, I never thought that I'd be one for buying a caravan but how lovely it would be to have somewhere to disappear to when life at home is getting a bit boring/stressful/mundane. Who knows, maybe next time I'll be taking people to stay in my own home from home.
Posted by Laura at 12:38 No comments:

Sophie - 'Mummy, why are you looking at your phone and the computer at the same time?'

If only I could look at 2 different things at the same time - now that would be extremely useful!!
Posted by Laura at 12:14 No comments:

Another year has passed since I had to say my last goodbye to my Mum - 5 in total now. I don't want to say that it gets easier as that isn't the right word. Somehow things just seem different, almost as if they never really happened.

My Mum was one of those people whom everybody loved. She was happy, fun, intelligent, beautiful, clever, charming, the list goes on. As a teenager I had the Mum everyone thought was cool. She seemed to understand what we were going through and I could tell her anything. I remember telling her when I first had sex - she was amazing! She asked how it was, was I happy, were we being careful - all of the things you need to be asked and none of the bad stuff. She rarely got angry and the only time I knew that I'd really disappointed her was when I felt like I couldn't tell her the truth. She was happy if I was happy and vice versa. We were like best friends - told each other everything, shared everything, relied on each other for everything. As a 15 year old this was the perfect relationship. She trusted me to make my own decisions, live my life and be happy. My friends lived by strict rules set by their parents, unable to tell them their deepest secrets whereas I could come home and chat to my Mum as if she were my friend. I felt so lucky. What I would give to have that now.

My Mum was quite a troubled soul. I've typed and deleted so many paragraphs going into details of our past, of the events leading up to her death but it just felt irrelevant. She never seem settled, always worried about being on her own. I always knew she liked to drink but didn't realise it was a problem until I was 17 and she was admitted to hospital with cirrhosis of the liver due to excessive alcohol intake. We were told it was unlikely that she'd be coming home due to the damage the alcohol had done to her liver. In true form though, my Mum was home within 4 weeks, celebrating Christmas and my 18th birthday as if nothing had happened.

After 7 years of stints in and out of hospital my Mum's body finally gave up. No longer able to undo the damage she had caused. I can still remember it all as if it were yesterday. I got the call 2nd January 2007 at my desk at work. She'd been admitted on boxing day with a burst ulcer. I'd only spoken to her on Christmas day from my skiing holiday and she hadn't mentioned anything about stomach pains, not wanting to ruin my first family holiday with B - her final selfless act. After spending 4 long weeks in hospital she'd had enough, gradually drifting in and out of consciousness until the point where the hospital called and said that we really needed to get there now (not an easy task when you're over 200 miles away) My brother and I jumped in the car with B and dashed to the hospital. I was so shocked to see her in those last few hours. Her body working so hard for each breath. I felt as if she had already gone. It was the worst moment of my life. How could she leave me, I needed her but it was too late. I was left in the room alone. Just me and my Mum, like it used to be so often. I didn't know what to do, what to say. I had to leave, needed some air, a rest from the heartache. I didn't last long, 20 minutes in the cafe trying to make sense of it all and I knew that I had to get back to her. Had to spend every last second I could with her. As I approached her room I knew that she was gone. The ward was eerily silent, no laboured breathing coming from her private room. Instead it was quiet, calm, peaceful even. We had to call the nurses who confirmed that she had passed. They took us to a private room and B left to get my brother. I sat alone in the nurses station staring at the clock. I can still see the clock now - exactly 7pm it was. I can't get that stupid clock out of head.

Even typing this I can't believe it actually happened, that she's really gone. Surely that was someone else, not me. Not my Mum. The saddest thing in all of this is what we have all missed out on. My Mum being a Grandma, being an amazing Grandma, cool, fun and completely inappropriate. Sophie often talks about Grandma Susie. My Grandmother (my Mum's Mum) died when I was 6 weeks old yet I always felt as though she was a part of our lives and that's what I am trying to do for my Mum. I talk about her to whoever will listen. I never want her memory to disappear. I accept it'll fade, they all do but as far as I'm concerned she's still an integral part of my life.

Sophie once said 'Mummy, did your Mummy die?'
'yes, she did' I replied
'well, that's okay' she said
'you don't need a Mummy because you've got me and Tom'

At the tender old age of 3 she's right. I have my own family now, my own life to lead and I will forever be devastated by the fact that my Mum isn't here to share that with me but I also know, deep down, that she's finally at rest. No more pain, no more torment, no more addiction, no more trying to make sense of her own life. My Mum will always be my Mum. She was an amazing woman with an illness which finally got the better of her. There's still a stigma surrounding mental illness. Our stiff upper lip prevents us from talking about it openly. If there's one thing that I've learned through all of this is that it can happen to anyone and it's all about awareness. No one believes that alcohol can really kill. Surely you can just stop drinking, but it doesn't work like that. We've discovered that the hard way.

I'm so proud of what my Mum achieved in her life. When it came to the heartbreaking task of emptying her flat of all of her possessions - a lifetime worth of things - I was completely overwhelmed by the fact that there was not one bottle of alcohol. She had been telling me for months that she'd kicked it and finally I had the proof. I was so proud of her. Sadly the damage had already been done. I brought home as much of her stuff as I could. It's all still sitting in the loft until I feel ready to sort through it. Her handbag still filled with the usual rubbish she hoarded - her letters, purse, hairbrush, lipstick, everything! I haven't even deleted her number from my phone. I suppose it's that part of me that can't fully let go.

I don't know why I've written this post today. Somehow it helps me to make sense of it all. You never know what people are going through behind closed doors and if it helps to make more people aware of the dangers of alcohol and mental illness then I'll be happy. I never believed all those years ago when I watched my Mum hide her bottle of cider in the washing machine that I'd be sitting here crying into the laptop, longing for the chance to speak with her again.

Memories fade but she'll always be a part of me and a part of my children. I still hear her when I speak to my brother and my Uncle David (my Mum's little brother) She's a part of each of us and no matter what has happened she will always be with us. I'm so proud to be able to say that I'm Susan Ridden's daughter. Anyone who knew her knows what an amazing person she was despite her troubles.

I love and miss her so much xxxxx 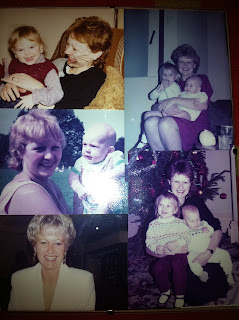 Email ThisBlogThis!Share to TwitterShare to FacebookShare to Pinterest
Labels: alcoholism, cirrhosis of the liver, Family grief, losing mum, loss of a loved one
Older Posts Home
Subscribe to: Posts (Atom)